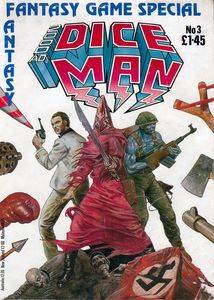 The five issues of "Diceman" were magazine games published using characters from the British anthology comic "2000AD." Each issue contained three solitaire games starring characters such as Judge Dredd, Nemesis the Warlock, Slaine, and Rogue Trooper. The games followed programmed story lines and were based, essentially, on a paragraph system - except, instead of paragraphs, the player was directed to illustrated panels. Each game contained all the rules necessary to play - generally combat rules and record-keeping - and was a self-contained adventure for one.