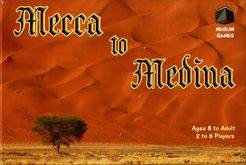 Pitting player against player, the goal of Mecca to Medina is to complete a series of Trading Routes faster than one’s opponents by collecting the required symbolic resources. Combining geography and world culture into its game play, Mecca to Medina is as educational as it is entertaining. Unlike other board games, action lurks around every corner of Mecca to Medina with every roll of the dice spurring activity, even when it’s not a player’s turn. Mecca to Medina is a new trading game designed for ages 8 and up. The game averages about 30 minutes in game play and can be enjoyed by 2 to 6 players. The objective of Mecca to Medina is to complete 4 trading routes. Each player attempts to by trading routes by turning in the resources collected by their city. Along the way, players will find themselves bargaining and negotiating with other players to get rare resources in the game. In addition, they will also have the option of buying specialty cards like camels and caravans while trying to avoid bad events cards, which can easily turn the tide of the game.