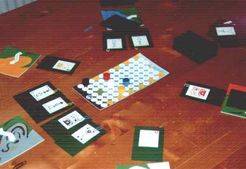 Why are you always the last to know? Everybody seems to know about that fight you had with your girlfriend - everybody but you. And did you realize your neighbour is the most popular guy in town? For now, at least. Because people are saying... Gossip! is a fast-paced card game about reputations. Players spread rumours, some bad, some good, in an attempt to be seen with the most popular people. Or, even better, to become popular themselves. Timing is all-important: that guy at the other side of the table might seem like a nerd now, but he might be Mr. Perfect in just two or three turns. Playing cards can kill your reputation!