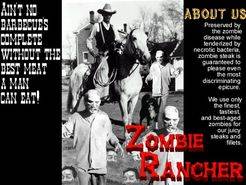 From the Invisible City Productions website: A post-zombie apocalypse game of entrepreneur-ism for two or four players. The zombie infestation of North America swept the United States like wildfire. Unchecked, zombie hordes destroyed the agricultural base; destroying fields, devouring cattle. Governments toppled as food resources became scarcer and scarcer. Quarantined by the rest of the world, it took 10 years for the survivors and governments-in-exile to wheedle support and aid from an international community filled with fear and skepticism. Early in the process of containment, eradication, and reconstruction, a horrible secret was discovered: To supplement dwindling ration supplies, many survivors harvested and ate the corpses of the zombies they killed. Shockingly, zombie flesh was the most tender, tastiest, best-aged meat in the world. Preserved by the zombie disease while tenderized by necrotic bacteria, zombie steak made several black-market smugglers very wealthy. Serving zombie steak became an unusual, but chic, status symbol among the elite and wealthy outside North America. Recognizing the demand for zombie steak, and desperate for revenue to rebuild the economy, the US government did not eradicate the last of the zombies, but herded them into federally controlled and regulated 'zombie ranches'. Each fiscal year, contractors bid for the right to harvest and process zombies from their local zombie ranch. You are one of the contractors lucky enough to land a rancher's contract. Your goal is to capture the finest, tastiest, and best-aged zombies and render them into juicy steaks and fillets. Welcome to the world of Zombie Rancher. The printable board and rules are available here: http://www.invisible-city.com/play/91/zombie-rancher