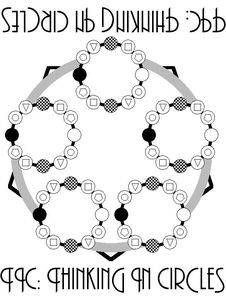 From the Invisible City Productions website: A game of intuition and second-guessing for two players. Object: To set three adjacent circles to your color, or to get three adjacent circles to match your secret shape sequence. You do this by outguessing what your opponent will play. Each player writes down a sequence of three shapes. The only valid shapes are circle, triangle, square, and pentagon. On each player's turn, the player picks a circle to adjust. The player secretly picks a number of beads and put them in his hand. His opponent does likewise. Every white bead counts for one point. Every black bead counts for one negative point. Reveal your beads simultaneously and add them up. This will give you a number from -6 to +6. Move the token in your chosen circle that many steps clockwise (for positive numbers) or counterclockwise (for negative numbers). If your total balanced out to zero, the token does not move. If tokens in three adjacent circles are resting on shapes that match the player's goal, then he wins. Note that the order must match also. If his goal is circle, square, pentagon then tokens resting on circle, pentagon, square don’t count. The sequence may be read forward or backward; square, square, circle is the same as circle, square, square. The current player also wins if tokens in three adjacent circles are resting on spaces that match his color. Rules and the board can be downloaded here: http://www.invisible-city.com/play/46/thinking-in-circles