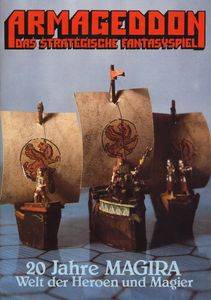 Armageddon - Das Strategische Fantasyspiel (Armageddon - The Strategic Fantasy Game) This edition of the Armageddon rules (9th printing of the 3rd edition) is a classic piece of German war-gaming history. Very unlike the modern 'German Games' this is a strategic war game of epic battles and diplomacy set in the world 'Magira'. This fantasy world was described by its authors (chiefly Hugh Walker aka Hubert Strassl) in a series of popular German pulp novels. It carries the tag line 'Das ewige Spiel' (the eternal game), as some particular sessions of this game have been played semi-continuously for the past 30 years by members of the associated society 'FOLLOW'. This version of the rules was published in 1990 by the EDFC (Erster Deutscher Fantasy Club e.V.). The game's fascinating roots date back to the late 60's when Fantasy literature and war-gaming was virtually unknown in Germany. Society members started to imagine and describe various cultures for their shared fictive world, and enacted the history through the board game in sporadic sessions throughout the following years. With this edition of the base rules (as well as several available supplements) everybody can enter the world of Magira and decide its fate in various levels of play, from tactical skirmishes to the simulation of a whole fantasy world. Contents: 84 A4-Page Rules in 18 separate chapters with 8 maps of Magira. 1 square meter playing field and 521 counters on 24 A4­ cardboard sheets.