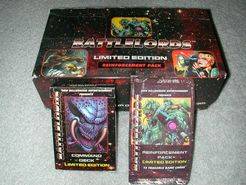 This is the CCG version of SSDC's Battlelords of the 23rd century RPG. The Battlelords Card Game pits mercenary against mercenary in a struggle for fame and fortune. The time is the late 23rd century. The field of battle is the frontier of the Fornax Galaxy. Crime. Intrigue, and warfare run rampant. You command an elite mercenary corps, ready to engage anyone or anything ... for a price. Plan carefully, act boldly, and carry a large weapon. On the frontier, we are all living on borrowed time! Each player (Commander) attempts to solidify the reputation of his or her mercenary company. Reputation is measured by completed missions and fame. By playing cards out on the table in a Command Display, Commanders set up shop on planets, enhance their holdings with special operations, recruit and equip mercs, send squads on missions, and bring the battle to the enemy (the other players). Successful completion of missions increases the Commander’s Fame and improves a Battlelord’s abilities. The Commander with the greatest Reputation over a pre-set amount at the end of any given round is the winner.