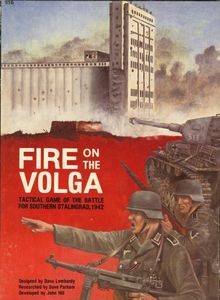 Fire on the Volga is a company level game of the struggle for the southern sector of the city of Stalingrad. Together with the companion game, Battle for the Factories and Streets of Stalingrad expansion set, players can recreate the epic conflict that is considered one of the turning points of the Second World War. Fire on the Volga comes with over 800 unit counters representing every different type and formation taking part in the battle, a 21" x 36" full color map of southern and central Stalingrad in exquisite detail, three scenarios, multiple players aids, a die, and complete rules for the basic and advanced level of play.”