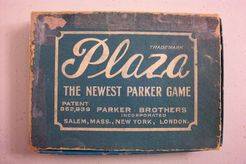 PLAZA is played with a five-suited pack of 60 cards, the suits being distinguished from each other by color (each color also has a little picture of an animal to help distinguish suits), the cards run from one to twelve in each color. A game turn consists of Draw, Play, Discard. Similar colored cards are placed in a row and similar numbered cards are placed in a column, eventually forming a card grid. The winner is the first player to run out of cards. This game was original enough at the time to get a US Patent (#952939)