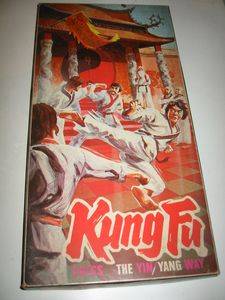 "Kung Fu: Chess the Yin/Yang Way Object of the game The object of the game is for each opposing force to reunite Yin and Yang. The Yin forces try to capture the Yang, and vice versa. Having captured the opposing force, the winner has achieved fulfillment, and the game ends." Kung Fu, made in Singapore in the 1970's, is a chess-like game. Instead of a king or general, each player has a Yin/Yang monad and takes on the role of Yin or Yang, controlling a team of Kung Fu fighters (who are dressed in Karategi). The pieces are supposed to represent movements made during the performance of martial arts and have names like Front Kick (Eagle's Onslaught), Hook Kick (Whip of the Dragon's Tail) and Forward Punch (Fist of Fury). Probably influenced by Chinese Chess, each monad is restricted to their own temple of six squares and may not face each other directly in the same file. Unlike Chinese Chess, there is a Guardian piece which stands in front of the monad and which is not restricted to just the temple. However, within the temple, it has the unusual power that when captured within it's own temple, both the Guardian and attacker are removed from the board. Kung Fu is a curiosity from the heyday of Shaw Brothers films.