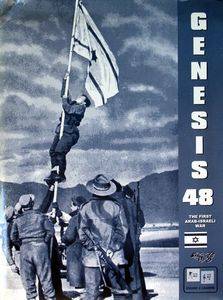 Genesis 48 is an expansion to the Advanced Squad Leader game system. From the game sleeve: "Genesis 48 tells the story of a war unlike any before or since. Kibbutzniks defending their homes, fighting alongside their wives. Homemade armored cars trundling into battle. Davidka mortar shells exploding with terrifying shrapnel--due to the soft metal used in the underground shops--with unexpectedly deadly results. The 1948 siege of Jerusalem. Numerous, well-equipped but poorly organized Arab armies. It's all here in Genesis 48 in a well-researched and extensive module presentation. Three sheets of color die-cut counters include 20 troop-types ranging from elite Israeli Palmach soldiers to Moslem Brotherhood conscripts. Israeli Molotov Tank Hunting Heroes. And more. You also receive numerous new vehicles, including 3 types of Israeli Homemade armored cars, Davidka and Parosh mortars, the Marmon Herrington IV, Jewish 'Sandwich Car' APC, and a variety of half-tracks up-armed with small turrets and a variety of armaments. You also receive a 22" x 34" historical map of Old Jerusalem, a color overlay of a kibbutz, three color card-stock play aids and a 32-page VARIANT rulebook full of vehicle and ordnance notes. All of this equipment is provided to use with the Jerusalem Campaign Game and the 15 well-tested scenarios provided." (Ownership of ASL, Beyond Valor, Hollow Legions, and Croix de Guerre is necessary to play this game). Second Edition - GENESIS II The Arab Israeli Wars From the Publisher: GENESIS '48 2nd Edition aims to polish every rough edge of its predecessor, while adding value in the form of new counters and situations. Rules such as the "Molotov Tank Hunting Hero" and others have been streamlined. Squad types have been reduced appropriately and redundancy in rules addressing their use edited down. Scenarios continue to use mostly non-desert, daytime situations and are moderate to small in size and play on geomorphic boards. An all new Kibbutz geo board is provided and a separate JERUSALEM '48 historical map-based module is coming with a fully remastered map that utilizes larger hexes than its predecessor. Thus, GENESIS '48 2nd Edition is a 100% geomorphic board product with 16 exciting scenarios and a LARGE COLLECTION of 1000+ of new counters! In keeping with the CH approach used in the Berlin and Omaha releases successfully, all you'll need to own is your ASLRB and a collection of marker counters. EVERYTHING YOU NEED in terms of color, die-cut counters is provided in GENESIS '48 2nd Edition! Punch it out and play, no more hunting through tray after tray of old counters to get into the action.