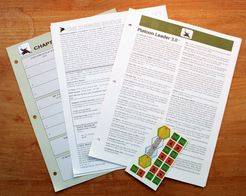 Platoon Leader is a system for playing Advanced Squad Leader and tactical level miniatures using a series of interrelated scenarios referred to as a 'campaign game' or CG. The aim of PL is to provide for an enjoyable 'campaign' experience within a reasonable time frame, playable by the average gamer over a couple of evenings. This Platoon Leader 'Booster Pack' depicts the drop of the British 6th Airborne 'Red Devils' at the Primosole Bridge in Sicily on 14 July, 1943 and the ensuing battle. In addition to a set of new PL CG Cards for each side, one overlay depicting the bridge and several unmounted control counters, you receive the entire PL 2.0 Upgrade rules package, including Chapter Divider. Expands: Platoon Leader