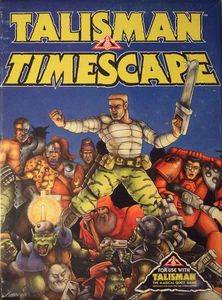 Talisman Timescape is the fourth expansion set for Talisman. Those who seek the Crown of Command face a new set of perils. Flung through space and time, they may find themselves in alien realms, faced with foes and dangers beyond their imaginings. This fourth expansion set for the world's most popular fantasy boardgame takes you to new worlds, with an add-on board depicting the fantastic worlds of the Timescape, 42 Timescape cards, 12 Timescape Purchase cards, and eight new characters who start from the Timescape itself. Part of the Talisman series of games and expansions published by Games Workshop Ltd.. Expands: Talisman