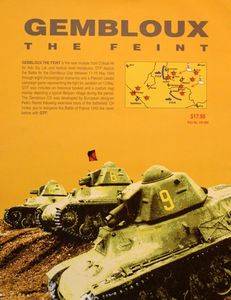 "Gembloux: The Feint is from Critical Hit and depicts the Battle for the Gembloux Gap between 11-15 May 1940 through eight chronological scenarios and a Platoon Leader campaign game representing the fight for Jandrain on 13 May. GTF also includes an historical booklet and a custom map overlay depicting a typical Belgian village during the period. The Gembloux CG was developed by European designer Pedro Ramis following extensive tours of the battlefield." Gembloux II The Battle for France 1940 - Gembloux II includes a new board CH1 (their first modular board apparently) instead of the overlay as in the first edition. New counters are included which may provide all of the French counters need to play if you don't have the official French module. Otherwise it is much the same as the first edition. The game is a Advanced Squad Leader module.