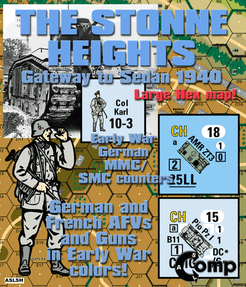 Stonne 1940 - The Battle for the Stonne Heights: May 15-18, 1940 is an ASL based game, depicting the bitter battle for the crucial village of Stonne, and its dominating heights, during the battle of France, 1940. This is early war tank warfare with waves of B1 bis, H-39 and FCM 36 tanks sweeping into the village of Stonne with orders to force the issue and press the enemy back over the Meuse crossings. Facing the threat of a collapsing front, the crisis facing the desperate French 2nd Army would be decided at the critical point at Stonne. If they could succeed and throw the Germans back across the Meuse, the enemy attack plan may well have failed. The German objective was to hold open the crucial Meuse crossings and seize the high ground at Stonne. Into this clash was drawn the Infantry Regiment Grossdeutschland, with its artillery and the attached Stu.Pi.Btl. 43. This elite formation would soon face waves of French tanks, including the heavy B1 bis, in heretofore unseen numbers in this classic and historic struggle. Stonne 1940 includes a historical game map of the battlefield, special rules, six new scenarios, 32 die cut vehicle counters, and a Platoon Leader 2.1 campaign game. Croix de Guerre: ASL Module 10 and Beyond Valor: ASL Module 1 are necessary to play this game. A second edition was published in 2007. The second edition included a redone map, which is significantly nicer than the map in the original module. Also, the extra campaign games from Critical Hit Magazine are now included in the 2nd edition,along with a full 16 scenarios. A third edition was published by Critical Hit in November 2011. The third edition appears to include the counters required for play if you do not own Croix de Guerre: ASL Module 10, but you still need to own Beyond Valor. It is unclear whether anything else has changed.