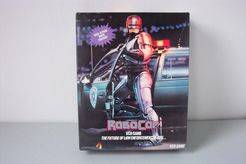 This VCR game is based on the RoboCop movies. You watch the game video (uses actual RoboCop movie footage) and get action cues to make moves. The goal of the game is to be the first to make four arrests and return to the Police Station. There is a warning sticker on the box that states "Based on the hit R-Rated move, Edited to be suitable for ages 12 and above. When landing on a given space, the player scans the tape until the code letter from the gameboard appears. The player then watches the footage to see what happens in the game. There are 5 different locations, not including the Police Station, and these are in rotation on the tape many times over – so you don’t rewind the tape, you just scan forward to the next location when the next player happens to land on one of the special locations. Eventually, you will have to rewind it when you reach the end, but you will have skipped lots of scenes by then and when you continue playing from the beginning you still have many new scenes to resolve that haven’t been used yet.