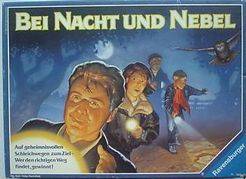 The players have to turn three times around the lake, but they ignore which compartments conceal traps. If the compartment is white, the player spends a turn, if it is red, he spends two. Otherwise, the player can move as far that he wishes. Obviously, it is necessary to remember the compartments of the board not to go back on the red compartments which were found by a player. A game of memorization, renewed in every game. If the players become used with the discs, one can change their places.