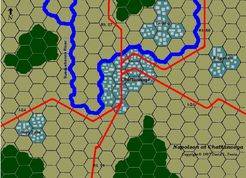 This is a self-published game that can be downloaded for free at several sites over the Internet (including the designer's site, so this is not a violation of any type). From the introduction in the rulebook: "Napoleon at Chattanooga is a painstakingly-researched, meticulously accurate simulation of Napoleon's campaign in the Tennessee Valley. It is also a two-player game of exploration and conquest in the Solar System, which is also painstaking but not necessarily accurate. This game is the first in the ACW (Advanced Chart Wars) series and is also considered part of the ongoing GBoTGCN (Great Battles of This Guy Called Napoleon) series by most of the people working in the stockroom."