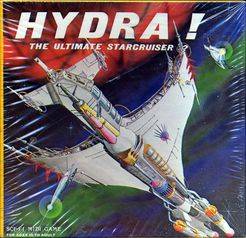 Hydra! (subtitled "The Ultimate Starcruiser?") was one of Grenadier's small-box Midi Games - a series that was also referred to as The Great Little Games Line. This was a line of four games that were somewhat larger than a typical boxed microgame of the day. Hydra! could reasonably be described as "Ogre in Space." As in Ogre, one player has a single huge unit while the other has many small units. Here the large unit is the eponymous Hydra, which has phasers, proton torpedoes, energy sapper discs, a gyro-de-stabilizer, a molecular structure distorter, and a force field projector. The other player controls an alien space fleet consisting of frigates, battle cruisers, larger battle cruisers, and mine sweepers. Damage for both sides is marked off on record sheets. The Hydra player's goal is simply to destroy as many enemy ships as possible, but players are invited to make up other scenarios and some extra counters are provided to facilitate this. Hydra is identified on the side of the box as product number 7001. However, on its rear cover-sheet the game is identified as product number 7002. This probably explains why some examples of Hydra have been found bearing the rear cover-sheet for the Midi Game "Journey", as that sheet was erroneously marked as product number 7001, which corresponded to the numbering on the side of the Hydra box.