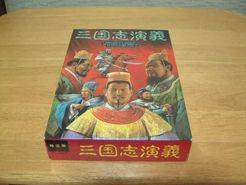 This is a Japanese wargame set during the time of the Romance of the Three Kingdoms era in Chinese history. the game is a first attempt to this theme in wargame format in Japan. And very famous one for its own sake. At game starts, players pick three character counters randomly. Yes, this is the "Oath at Peach Garden" for each player. Game include over 100 characters. So, the game is basically a "Grow fast" type multi players game.