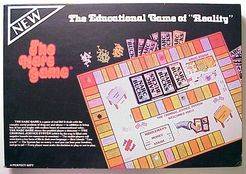 "The Narc Game" strikes an unusual, and perhaps unintentional, balance between the blatantly drug-sympathetic "Dealer McDope" and the "just say no" approach of "Decisions". From the lid description above, it would appear to be a strictly anti-drug game. Yet, curiously, actual game play comes across more as a "beat the system" game than one of social value education. Two to six players compete, with the object of the game being to accumulate the fewest arrests. The game ends when all players have successfully made it from the "START" square to the "HOME" square. Along the way, players gain and lose money in various drug deals, and must try to avoid a stint in the Criminal Justice system that costs them money and sends them back to "START". The joke of the game, of course, is that it is almost impossible to go from START to HOME without getting sent back to START.