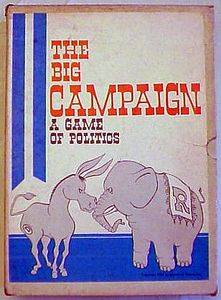 "The Big Campaign" is a game for either two or four players. In a fashion reminiscent of Monopoly, players gain the electoral votes of a given state by landing on it and buying it. Opponents who land on one of your states must pay a penalty for campaigning in that state. However, there are Campaign issue cards that can allow you to gain a state for free, or have a state wrested from your control and placed back up for grabs.