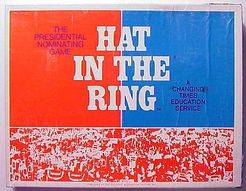 "Hat in the Ring" is a throwback to an era when political party conventions still were perceived to hold an important role in the nomination of each party's candidates. In this game, three to eight players compete for their party's nomination; however, in a classroom setting, additional roles such as Campaign Manager, Treasurer, etc. may be assigned to other participants. Players go through a series of primaries, then try to gain the required number of delegates at their party's convention to win on a given ballot. Delegates are won in blocks of 10; a player must therefore claim at least 660 out of the 1,300 delegates to win a given ballot and claim the nomination.