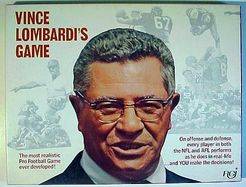 "Vince Lombardi's Game" is a football simulation for two players that can be played on three levels. The basic game uses generic football teams. The intermediate game applies aggregate offensive and defensive ratings for the NFL/AFL team of each player's choice. The advanced game permits each side to use the individual stats for each NFL/AFL football player. This game was published under the title "Vince Lombardi's Game" in 1970 and 1973, and under the name "Be a Pro Quarterback!" in 1971. The latter variant is a bit of an oddity. The cover lists the maker as Sportsgames, the instructions list the maker as Sports Games, and the board lists the maker as RGI. Whoever published that edition, "Be a Pro Quarterback!" served as an odd placeholder between RGI's 1970 and 1973 Vince Lombardi football games. The rules of the game are the same as for the 1970 "Vince Lombardi Game" edition; only the players are different. See also the 1967 version "Fran Tarkenton's Pro Football" by RGI, using the same plays and cards, but in a much higher quality format. (The cards are thick board, laminated, and backed with light felt. The plays board is full color on a stand, laminated so the play differentials can be listed by each play in grease pencil. That version also includes a down maker and a ten yard marker.)