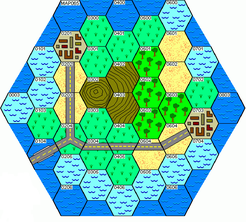 Orbital Battle is a wargame set in space. Two rival empires fight for control of the eight planets in a solar system, using land, air, and space units. What sets this game apart from similar wargames is that the planets move in their orbits, changing the game map every turn. This two-player game comes with counters and map sheets. All you provide is a six-sided die, and pencils and paper for some very simple record-keeping.