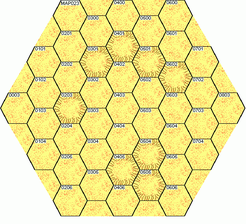 "Jason! I know you're there!" Hector's voice echoed across the valley. "You can hide behind your goblins and skeletons, but I know you're there, and I am coming for you!" He knew Jason could hear him, and he knew that his arch-enemy could not resist such a challenge. But how would he respond? The answer wasn't long in coming. A huge boulder sailed across the valley and smashed into the ground just short of Hector's forces. One of his men went down screaming, hit by a sliver of rock. So Jason had a cyclops in his army, did he? Hector looked over to his minotaurs, roaring and waving their battleaxes. They would make short work of a cyclops, and then his ogres would begin the slaughter. He gave the hand signals for his line of mighty beasts to advance. This would be a day to remember! If he had noticed the shadow that flitted over him, he might have looked up and seen Jason's roc beginning its dive on his forces... Mythfire is a 2-player wargame of mythical beasts, mostly from Greek mythology. Players choose their armies from an array of creatures with varying abilities, then fight to the death.