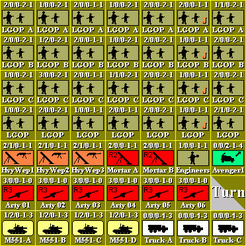 Player 1: Colonel, we got trouble. The nation of Hyrax has been invaded and overrun by forces from the neighboring nation of Koni. The United Nations has condemned the invasion and authorized the use of force, and your 82nd-Airborne ready battalion will be that force. You must make an immediate drop before the invaders can dig in, and reinforce yourself as needed later. Your goals are to free the capital of Hyrax and at least one other city from the invaders, and to capture at least one airfield so other UN forces can land there and finish what you've started. Those forces will start arriving in three days, which is also the amount of time your men can fight without resupply. Take 'em down! Airborne all the way! Player 2: A dog's curse be on the United Nations and their resolutions! This territory belonged to our ancestors before the colonial imperialists divided it up, and it is ours again, and we will never leave it. The initial attacks were successful beyond our wildest dreams, and the whole country fell like dominoes. Now we must prepare for the counterattack that the UN and their lackeys will certainly launch. Most of our navy is at sea, searching for enemy ships that might bring invaders, and all the land approaches to our nation are well-guarded. But an attack could come from anywhere at any time, so you must be vigilant. Long live Koni! Airborne! is a 2-player Expansion for Gators! depicting a modern US airborne operation. It uses the same basic rules as Gators!, and the same opposing force. Expands: Gators!