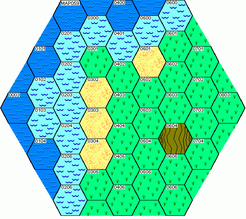 Player 1: Colonel, the friendly island nation of Unnarstan has been engulfed in revolution. The surviving members of the government have asked for American intervention. Your MEU (Marine Expeditionary Unit) is in the area, but there are no other forces available, and speed is of the essence, so the Marines have the ball. Your task is to fight your way into Unnarstan, occupy the capital, and bring the rightful government back there before you run out of supplies, which will happen in 15 days. You have advantages in numbers and quality, and you get to choose where your invasion will go in, but time and terrain are against you. Semper fi! Player 2: Liberation! At last, our fair nation is free of foreign influences! Generalissimo, you have done well, but the imperialists are sure to react to our coup. Our armed forces are equipped with American weapons, so if they try to intervene, you can give them a taste of their own medicine. You must fight wisely, for we are outnumbered, but we know our own land and can defend it well. All we require is that you delay the invaders until their supplies run out, and then annihilate them at leisure. Death to the invaders! Gators! is a 2-player wargame depicting a modern US Marines amphibious operation. This is a complete game with counters and maps (you must download my M8 map system separately). All you provide is a six-sided die.