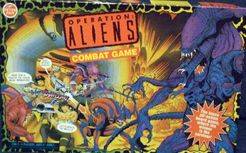 From the game: The Starship "Narcissus" answers a distress call from a nearby planet. On board is a task force of colonial marines. Now, four days later, only a handful remain, after a desperate battle between man and alien on the planet's surface. These few marines believe themselves safe on board the "Narcissus", as she hurtles through space, leaving the terrible planet a million miles behind her. But that's when the nightmare really begins... The object of the game is to survive long enough to set the ship on self destruct by visiting the three coded control panels. Weaponry and the sick bay help the Marines achieve their goal. Once all the self destruct areas have been activated, the Marine must begin the countdown by activating the ship's computer in the computer room. Then the Marines must leave the 'Narcissus' before the ship explodes, via the escape capsule on the bridge...but beware the Queen Alien! Remember, in space no one can hear you scream! This game was for the officially licensed "Operation: Aliens" cartoon series based on the "Aliens" movie.