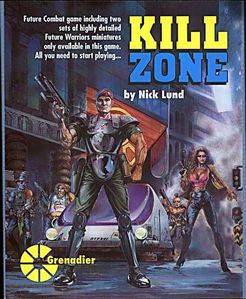 Combat between gangs, military, bounty hunters, scavs, etc. Units are either squads or individual heroes/cyborgs. At the start of the game, players give all of their units orders and then begin activating them. At the end of the turn, players may attempt to change their orders. Combat is done by rolling to see if you hit and then rolling for damage. Troopers can be suppressed or killed - heroes get a saving throw to avoid the latter. A point buy system is provided - there are some differences among the factions - the government troops and police tend to be better equipped while the rebels, scavs and savages are fast moving. There are 3 scenarios provided: Encounter (a basic firefight), Raid and Capture and Assassination. Unlike some other games on the same topic, there is no campaign system.