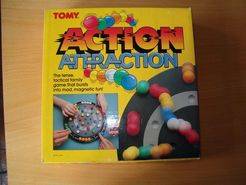 Action Attraction is a game played with 42 magnetic marbles on a circular, 11" diameter, playing board with 31 indentations in it. The idea of the game is very simple, each player in turn places a marble onto one of the indentations on the playing board. The first player to get rid of all his marbles is the winner. The catch is, that because the marbles are unevenly magnetic, if you are not careful when you put a marble on the board, sometimes you will cause some (or even many) of the marbles to become attracted to each other. Any marbles that suffer this fate have to removed by the player causing the attraction, and added to his pool of marbles. The game comes with suggestions for various alternative versions of the game. Action Attraction can be played solo. The game has two different skill levels which are switched between by movement of a lever on the underside of the board. French title: MAGNET'O'BILLES Dutch title: Actie Attractie