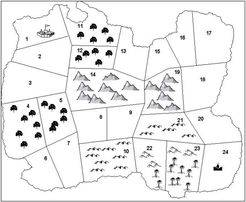 "Steel and Crystal is an easy solo game of conquest on a fantasy land. You are the General of your Empire and your mission is simple: defeat the enemies of your Emperor. Every scenario states the initial forces that you have under your command and the objectives you must obtain to win." "Scenario #1: the Aidlon offensive. After 5 years of relative peace the Xytyan empire has newly started a series of offensive maneuver against the neighborhood kingdoms: the Isle of Aidlon is now menaced so you've been assigned to the defensive campaign . . . You win the game if you control the city-fortress of Hishimur (area 24) at the end of any turn." This game was part of the Microgame Design Contest 2002. The file in the link section contains this and several other games.