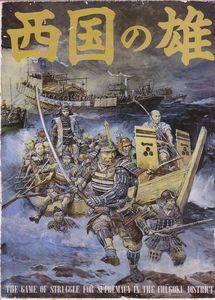 Saigoku no Yu (Champion of the West) depicts Motonari Mori's conquests. This nickname was given to him after his victorious battles in the western part of Japan. Four scenarios are included: "The Battle of Orishikiba", "The Battle of Itsukushima", "The Battle of Koriyama" and "Destruction of Ouchi". Scenario includes HEAVY restrictive special rules to emulate the outcome. SCALE: each map hex is roughly 6000 meters. Each game turn represents one week of real time, each combat units about 500-5000 soldiers. Game period: 1540 to 1557 (? turns) Counters: 172 Map: A2 (42 x 59.4 cm) Republished in Game Journal #68.