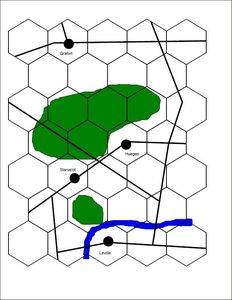 "Blitz Commander is a game representing Operational Level Warfare during World War 2. It is a universal system, in that its rules can be used to represent any given battle or period of fighting during the War. Designed to be played with plastic or metal miniatures (Axis and Allies Europe minis work great), the paper counters included with the game can be used as a rather makeshift substitute." Part of the Microgame Design Contest 2002.