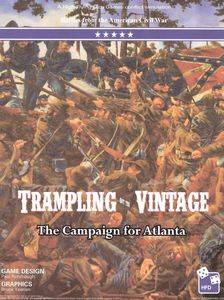 From the publisher's webpage: In 1864 General Sherman's march to Atlanta faced the heart of Dixie with the prospect of bloody fighting such as had already devastated large swathes of the Confederacy. And yet, despite a superiority in men and material, his task was a daunting one. Tied to the single-line of the Western and Atlantic Railroad for supply, and marching through a wilderness, Sherman could not afford to run up a huge butcher's bill. A too bloody summer's victory in Northern Georgia could easily result in a November defeat for President Lincoln in the forthcoming general election. On the other side General Johnston, commanding the defending Army of Tennessee, was no less vexed. He had attempted to whip his flagging forces into shape, despite sagging morale and a lack of reinforcements, but he knew this was a battle he could not afford to lose. Only reluctantly appointed to command by President Davis, Johnston would also be hamstrung by a divided and uncooperative staff. Trampling out the Vintage is a simulation of the 1864 campaign for Atlanta. Both players maneuver and fight their units in an interactive sequence of play that places a premium on planning and decision making. Can you as General Sherman present the city of Atlanta to President Lincoln in a time and manner that will hasten the end of the war and ensure a second term for the Republican administration? Or, as General Johnston, can you stave off the Northern host and save the heartland of the Confederacy from capture and ruin?