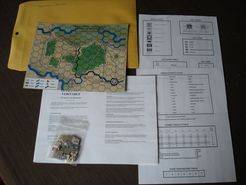 From the Rules Introduction: Operation: Veritable is an introductory level, two-player wargame on the battle for the Reichswald forest. It was fought during the second and third weeks of February, 1945. Despite the looming defeat the German's faced, the Wehrmacht was still able to put up a stiff defense. Fought in inhospitable terrain and terrible climatic conditions, Commonwealth troops from Canada, England, Wales and Scotland launched an offensive that General Bernard Law Montgomery hoped would finally bring them to the Rhine and victory. Reimplemented by: Operation Veritable