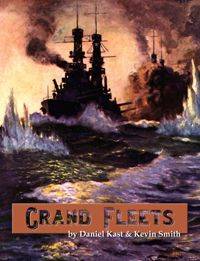 From the publisher: Grand Fleets is a comprehensive miniatures game of dreadnought-era naval warfare. In addition to rules for everything from ships to aeroplanes, Zeppelins to submarines, the rulebook includes: Data cards for over 120 ships, plus guidelines for converting any ship of the period to game values; Eight scenarios encompassing conflicts from the Sino-Japanese War of 1894 through the opening salvoes of World War Two, including several variants; Fifteen pages of weapon data, covering all major gun and torpedo models in use through 1939, over 200 aeroplanes, and more than 20 airships; and Optional rules for flotillas, night-fighting, smokescreens, and more!