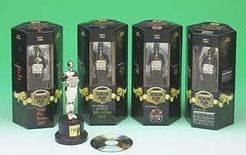 想玩 拥有
Movie Mystery: The Sinking of the S.S Titania

Components: Contents: Screenplay Award Statue, 10 sided 'Decider', Directors Audio CD, 10 Cue Cards, 10 Contracts / Invitations, 1 Hosts' Party Planner, 10 Character Profile Cards, 10 Identity Badges, 10 Screenplay Nominations Cards, 10 Envelopes, 10 Pencils, Instructions Publisher's Description: "It’s 1912, the new age of travel. You are young(ish), attractive, fashionable and are captivated by the idea of travel to far off places, with the opportunities for adventure, romance and love. You have a ticket for the maiden voyage of the S.S. Titania sailing from Southampton to New York. Once on board you find yourself in the company of people like yourself with similar expectations. At the Captains’ table, in the casino and in the luxurious bars and lounges, the adventure and romance unfolds as you interact with your new found friends -though one of them is not all he (or she) seems. Then tragedy strikes, all hell breaks loose and all must face the awful reality of what they said could never happen... THE SINKING OF THE S.S. TITANIA The players are the passengers. They will act out SEVEN SCENES, working from instructions given by the DIRECTOR (on the audio CD). They arrive on set 'in character', each with their own secret identity (sealed instructions sent out by the host(s) with the invitations). The evening culminates in THE SCREEN PLAY AWARD CEREMONY a magnificent affair where players are judged in three categories; On their abilities to ACT, to IDENTIFY CHARACTER TRAITS IN OTHERS and to DISCOVER THE SECRET. The winner will keep the prestigious SCREEN PLAY AWARD STATUE." Brief Notes: This is one of a series of "Movie Mystery" games, that can be a great party game among people who like mysteries and a little play-acting. Role-playing gamers can easily enjoy this as well.