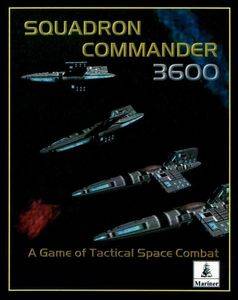 From the game's site: SCALE: Tactical. Time and distance scales unstated. Each model represents an individual spacecraft. PERIOD: "3600 A.D., a time when fragmented human empires first come into contact with an alien menace (the Vallarri)." "This game is a space fighter boardgame for which custom miniatures are available. Players can design their own fighters or use pre-designed plans. Weapons include lasers, cannons and missiles; defenses are armor and shields. Fighters move in an order determined by their tactics and the pilot's skill level, and firing can take place during movement. Damage results in critical hits, which limit or eliminate ship systems or wear the starcraft down until structure failure occurs. Rules allow players to form squadrons, then fight a series of individual battles or a linked campaign. Background material (optional) details six human empires and one alien power." The Game's Components consists of the following: '56'-page rulebook (includes record forms) '4'-(four) 11" x 17" mapsheets (black with hexgrid) '2'-(two) countersheets (counters must be cut out) The game includes a rule book with rules for both Basic and Standard games. Two full-color countersheets are included along with a hex-map so that you can start playing immediately. Dice are not included. Three 6-sided dice and one 10-sided die are required for the Basic game, while the Standard game requires one 4-sided die, three 6-sided dice, one 8-sided die, one 10-sided die and one 12-sided die. The rulebook contains 21 pre-designed fighters, each associated with one or more of the political entities of the 37th century. Although an official set of miniatures is available, these rules are suitable for use with any space fighter models of appropriate size.