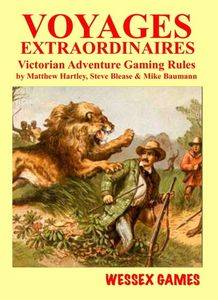 From the publisher: Written by Matthew Hartley, Steve Blease and Mike Baumann, Voyages Extraordinaires is a simple game to play, with the emphasis on the players having a good time, rather than becoming bogged down in rules minutia. Whereas other Victorian Adventure Games games have tended to concentrate on the more recognized military aspects of the period, Voyages Extraordinaires is geared more towards adventuring, through the use of our unique turn sequence and archtype character profiles. All you need to play Voyages Extraordinaires is a copy of the rulebook, a handful of miniatures, some ten sided dice and a flat area on which to play. The Voyages Extraordinaires rulebook contains: The basic rules for adventures in distant realms and a combat system that allows for human characters to successfully battle large beasts such as elephants and dinosaurs, as well as the inhabitants of Mars and Venus . An optional complete exploration time line from 1788 to 1899, mixing fact and fiction. Character templates for over a hundred different character types with their unique traits. Three introductory scenarios following the adventures of Professor Peterson, the most noted scientist in the Empire.