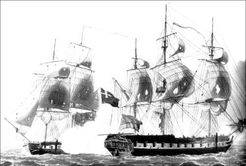 From the Publisher: Written by Matthew Hartley and Steve Blease, Strange Tydes is a fun and simple game to play of fantasy age of sail naval warfare. Use ships based on historical equivalents of the eighteenth and nineteenth centuries, the way only an Orc or Dark Elf can. Pit the wooden walled men o'war against the erratic ironclads of the Dwarven principalities. Encounter sea monsters and face strange magick on the oceans of The Land. Play the only game we know of where you can kill the opposing vessel's ship's parrot!! All you need to play Strange Tydes is a copy of the rulebook, a selection of models (though cardboard counters can be used), some dice and a flat area on which to play. The Strange Tydes rule book contains: Complete tabletop rules for naval battles between the various races of The Land, including Ironclads, Fortifications, Fire Ships and Magick. Full background details including a map of the treacherous region known to all as The Barbarous Coaste. Details of all the races of The Land fighting on the seas of the Barbarous Coaste during the Wars of Dwarven Succession. Naval Lists of the various fleets involved in the Wars of Dwarven Succession with full details of crew and vessel availability. Three introductory scenarios set on the legendary Barbarous Coaste.