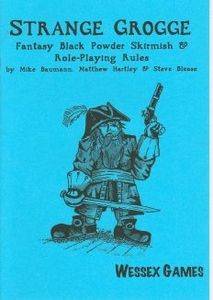 From the publisher: Strange Grogge is a set of black powder fantasy skirmish rules, designed for 28mm scale battles between orcs, dwarves, elves and other popular fantasy races. Written by Mike Baumann, Matthew Hartley and Steve Blease Strange Grogge is set in Wessex Games&amp;#65533; fantasy realm of The Land, centering around the pirate infested region known as The Barbarous Coaste. In the game the player creates and takes control of either a band of pirates or government troops and fights out any of the frequent skirmishes that take place in the towns, jungles, lagoons and islands that make up the Barbarous Coaste. The rulebook also contains optional role-playing rules to provide even more detail for players, especially those who have a hankering to be the infamous Dwarf pirate Shortbeard or other famous personalities. Strange Grogge contains numerous weapons options, a swashbuckling melee system, four different types of magic (from gastronomic to singing sea shanties) and a campaign system .