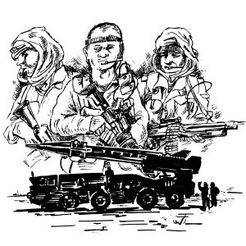 From the publisher: Scudbusters II: Return to Iraq is a set of modern Special Forces combat rules which combine playability and realism in an attempt to provide gamers with a simple yet challenging game of Special Forces warfare based on the experiences of Allied Special Forces troops in the Gulf and Iraq Wars. So if you read Bravo Two Zero or where just intrigued by the TV coverage of combined US Special Forces-Peshmerga operations in Northern Iraq, here's Scudbusters II: Return to Iraq... Written by Matthew Hartley, this new edition of the popular Scudbuster rules expands beyond the original game, which covered SAS operations in the Gulf War, to include all Allied Special Forces and their activities in the 2003 Iraq War. The rulebook also includes options to extend to operations in Afghanistan and even hypothetical actions in "Axis of Evil" countries such as North Korea. In the game the player takes control of the Special Forces units and operate in an increasingly challenging environment as fatigue and casualties take their toll the longer your troops are in the field. The Iraqi forces are controlled by reaction tables and can be as unpredictable as in real life. Scudbusters II contains AFV rules, ambush tables and strategic level rules that allow gamers to link missions together as they happened in the war. Reaction tables for Iraqi regulars, Baathist fanatics and Fedayeen Saddam are also included in the rulebook as well as rules to include Kurdish Peshmergas operating on the side of US Special Forces.