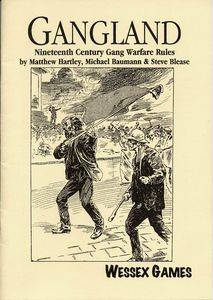 From the publisher: Written by Matthew Hartley and Steve Blease, Gangland is a set of wargames rules from Wessex Games, allowing you to recreate the gang battles that raged in the inner cities of the western world throughout the nineteenth century, as well as the fights against the forces of the establishment that occurred in cities like London, Paris and New York. As well as providing a comprehensive set of rules to recreate the battles of the period, Gangland also contains five introductory scenarios, illustrating the depth of the background in which these rules are set: New York 1834 - join the Bowery Boys as they attempt to smash their way past the Dead Rabbits . Chicago 1897 - meet the Irishers and Bohemians, two gangs of school kids who fought a lethal twenty-five year long gang war. New York 1857 - the most bizarre gang war of all with two New York police forces fighting each other and attempting to free each others prisoners. San Francisco 1875 - defend the honor of the Suey Sing Tong against the insults of the Kwong Dock Tong. London 1887 - strike a blow for social freedom against the repression of the British government by marching on Trafalgar Square.