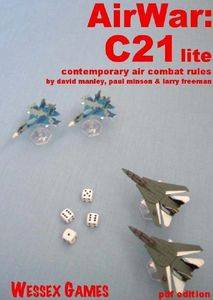 From the freely downloadable PDF: AirWar: C21 Lite is a cut down version of the second edition of AirWar: C21, our popular fast play, “entry level” set of rules for dogfights set in the years after WW2, and for near future SF games. The rules use a quasi 3D manoeuvre system, whereby the action is fought out in 2D, but with some representation of 3D air combat manoeuvres. The Lite version is intended to give you the basics of the game and allow you the opportunity to try out some dogfights using the AirWar: C21 system between US F-14 D Tomcats and Russian Su-27 Flanker B’s. Player notes: A hexless tabletop miniatures game with each miniature representing a single aircraft. The system breaks game turns into two phases, with each aircraft moving &amp; attempting a manoeuvre in each phase. Turn summary (edited from PDF): Phase 1 • Select and apply engine power speed changes (unless stalled) • Roll for initiative, conduct radar/visual spotting • Move (if turning, move half the aircraft Speed, turn, and move the second half) • Test for and execute all movement or manoeuvres in order of initiative • Resolve effects of any missiles launched last phase • Launch new missiles • Resolve air-to-air gun or rocket attacks • Resolve speed changes due to manoeuvre or stall recovery Phase 2 • identical to Phase 1 Tests for manoeuvres vary in difficulty, making a Barrel Roll easier than an Immelman, etc. The system uses multiple D6 &amp; D10, single die rolls for tests, detection, etc, multiple for damage. Speed, damage &amp; currently carried weapons are the only variables during play, but each aircraft &amp; weapon has many values to record before starting. Although simplified from the full rules, the system includes a large variety of factors to simulate air warfare, with only the lack of altitude tracking being a notable abstraction. Only statistics for the F14 Tomcat &amp; Su27 Flanker and their weapons are included in the Lite rules.