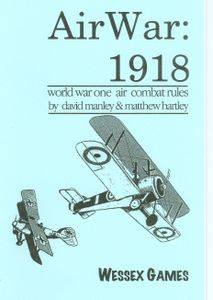 From the publisher: Written by David Manley and Matthew Hartley, AirWar: 1918 is the second in a series of introductory level air combat rules (following on from AirWar: C21)based around the same innovative core system. Utilizing a unique 2D system to recreate the 3D maneuvers of dogfighting, AirWar: 1918 is a perfect introduction for the newcomer to the fun of air wargaming as well great for the more experienced 'old hand' looking for a simple yet enjoyable set of rules to introduce his 'groundpounder' friends to war in the skies. AirWar: 1918 includes historical scenario ideas from Great War and Russian Civil War air battles as well as data tables for many aircraft in service during the Great War for Britain, France and Germany, as well as some from Russia and Italy. AirWar: 1918 is a set of Great War wargames rules for use with any scale models from 1/72nd to 1/300th. Combining playability with relaism, they provide gamers with a simple yet challenging game of Great War air warfare, retaining the spirit of the period, without sacrificing the speed and excitement. Includes: A 2D system that recreates the manouveres of 3D dogfighting. Rules to cover ground attack, rockets, balloon-busting and zeppelins 11 scenario ideas based on historical incidents from 1915 to 1919.. Statistics for over 50 aircraft from Britain, France, Germany, Italy and Russia.