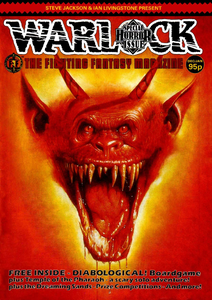 Simple fantasy-themed abstract strategy game from the mid-80s, when such things weren't as popular as they are now (early 2000s). Published in the last issue of Warlock magazine, number 13. The board depicts the classic demon-summoning layout, with pentagram and magic circle. One player is the wizard, the other, the demon; both are armed with tokens, two for each ancient element (earth, air, water, fire). The wizard plays first, setting up his elements hidden at the points of the triangle and pentagram with no opposing element on the same line. The demon plays second, laying down one element at a time next to the wizard's and seeing what happens before playing the next. The idea is that the wizard should create a difficult-to-guess defense, while the demon tries to solve the puzzle and/or hedge his bets.