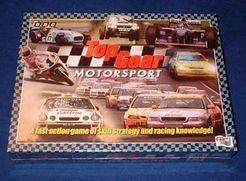 Top Gear Motorsport is one of several board games based on the popular BBC UK television series Top Gear hosted by Jeremy Clarkson. The object of this racing trivia game is to be the first past the chequered flag at the end of an agreed number of between 1 &amp; 11 laps. Movement around the circuit depends on answering some pretty tough motorsport questions. Get the answer right and your foot is on the accelerator, get it wrong and you are going backwards! Though (motoring) trivia based there are many variables which can improve or reduce your chances of winning: The circuit itself is tortuous so keeping to the racing line is essential. Hazard and weather cards, which can turn the track into a skid-pan make life interesting so choice of tires is critical, as is choice of fuel. Game Contents:- 1 x playing board 1 x blue dice 1 x red dice 6 x coloured lap counters 6 x coloured racing helmets 388 x motorsport cards 12 x tyre cards 1 x set of red rocket fuel tokens 1 x set of blue fuel tokens 1 x lap counter board 1 x rules sheet The box notes describe this game as a fast action game of skill, strategy, and racing knowledge. You need a very good general knowledge of motorsport to enjoy this game to the full, but the rules include a shorter, faster version of the game can be played by using only the hazard cards and no questions, making game-play much less difficult.