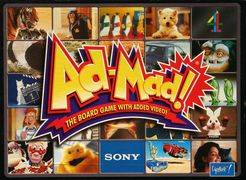 Ad-mad is a mime and acting based game based in the wacky world of television advertising. The game is played on a board featuring eight "rooms" and each player has their own room and television remote control. Cards that look like televisions invite the players to sing, mime or enact some of the most memorable and funniest product advertisements. High standard antics are awarded with "buttons" for the remote control, and players move around the boards in search of a full set of buttons.