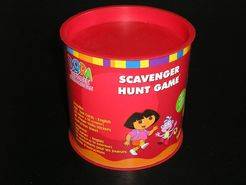 Meant to be played individually or as teams, the game consists of 100 task cards each of which lists four items to acquire or tasks to perform. Half of the cards are for indoors and half for outdoors scavenger hunts. Tasks could be anything, such as the following: - Bring back something that has a checkered pattern. - Build a house out of Lego building blocks. - Find a watering can. - Stretch elastic bands over a board and try to play a song as if it were a guitar. - Make up and draw a flag for the city or town you live in. The game also includes player-task stickers with Dora the Explorer characters on them. Ideal for parties or groups of children. Adult participation encouraged.